Word Vagabond is pleased to welcome back John Barlow, author of Hope Road and its new sequel, Father and Son.  Matt Schiariti reviewed Hope Road for us back in February, and this time we are privileged to have some questions answered by the author himself!

John Ray is called to the scene of a violent murder. The victim is an old associate of John’s dad, local crime boss Tony Ray. There’s no obvious motive for the crime, but everybody agrees on one thing: don’t tell the police.

John, the Cambridge-educated white sheep of the Ray family, has always refused to be part of his father’s business. But he’s a bit of a maverick, with a foot in both worlds, and he’s not quite as white as he would like: exactly the kind of person you’d want to investigate an underworld murder.

His search for the killer takes him back to events twenty years ago, and to another, even more heinous crime. But he still doesn’t really know what he’s looking for. Until it’s too late.

Plus, he’s not the only one looking… 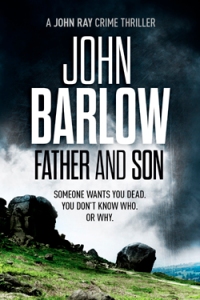 How would you describe FATHER AND SON?

It’s about a man who tries to find the killer of an old family friend. But as he delves into the man’s past, events spiral out of control. It’s a crime thriller with some elements of a police procedural, and deals with both the aftermath of former crimes and a new wave of terror that hits the investigation.

Who is John Ray?

John Ray is the son of Antonio ‘Tiny’ Ray, a local crime boss in Leeds (northern England). Tony Ray is Spanish, and arrived in the UK in the 60s. He built up a thriving business in fake/stolen goods and counterfeit money. John is the ‘white sheep’ of the family; he always refused to join the family business, but he’s a bit of a maverick and events have a habit of drawing him back into the world of crime.

You’ve written in a variety of genres. Why crime thrillers?

Hope Road was my first serious crime novel. The response was a lot better than I’d expected, and I found that I immediately wanted to write another. I like the mix of strong characters and tight plot in writing crime. With such a well-known and popular genre there’s nowhere to hide; you can be as artful as you like, but whatever you do to be distinctive, you have to make sure the novel delivers the kind of experience that crime fiction lovers expect.

Will there be more in the John Ray / LS9 series?

Most definitely. The original plan was for nine novels. I have a broad series outline, but nine is a lot of novels, so whether I’ll get there I don’t know.

Do you do anything other than write?

Yes. I also work as a ghostwriter, which is great fun because you can get immersed in a project without it taking over you. Apart from that I’m a feature writer for a good magazine, and I do the odd translation.

If you hadn’t been a writer, what would you have liked to be?

When I was young I wanted to be a chef. When I left (high)school I became a musician for a while, a career path I may well have followed after university, if the economy at the time hadn’t been so bad; there was just no work for musicians in the UK, so I went to live in Spain instead.

What interests you apart from books?

I very much like food! OK, so I’m basically greedy. But I also like learning more about food, how it is produced and prepared. I write articles for a food magazine, which essentially means I get paid to travel around and eat. What could be better? Other than that I like travel, music, and I am currently obsessed with American TV drama.

Is the ebook revolution empowering independent writers, or destroying the publishing industry?

I think that long-term it’s positive for everyone. Writers get the chance to find a readership directly. If they succeed, they can decide whether to continue as indies or look for a publisher. Meanwhile, publishers can take the self-publishing market as a testing ground, cherry picking books that have already proved themselves. The process also increases flexibility and diversity. I self-published a book that I was sure had an audience. It hasn’t really found that audience yet, but because ebooks are forever, it’s still there, selling a couple of dozen copies a month. Nobody loses.

Do you now consider yourself an ‘indie’ writer?

Well, not exactly. I self-published the first John Ray novel, HOPE ROAD, as an experiment: it was my first serious crime novel and I had nothing to lose. My agent then wisely pointed out that, since the first book in the series was self-published, we couldn’t really sell the second book to a traditional publisher. So for the moment my crime novels are self-published. But I have another project coming out soon, a collaboration, which will be published in a more traditional way.

You’ve been on both side of the publishing divide, first with HarperCollins and Farrar, Strauss & Giroux, now as an indie. How do they compare?

I love being published by a big house. They’re full of really bright people who adore books. Doing it on your own means you have to find an editor and a proof reader and a cover artist, all of which costs money. However, for commercial fiction these costs are not too onerous, and if you can be disciplined and thorough in how you go about things, I think it turns out pretty much the same. In any case, 99% of the time you’re just writing, so there’s no difference at all on a day to day basis.

Where can your readers stalk you?